My niece and her husband were having a housewarming party in Vista, CA, on March 3rd, so I took the slow road down US-101 and did some wine tasting in Paso Robles  (http://www.pasowine.com/) on the way south, and on the way north a few days later.

On Thursday, March 1, I went to some of the "east side" wineries, mostly along Union Road, south of Cal-46 (the main-east west highway). Wineries I visited included:
I'm a repeat visitor to Eberle. And have never been to the others. I'll probably be back to Eberle and Bianchi on future visits. I've never heard of the "Lagrein" varietal until I went to Maloy O'Neill. That was a nice find. Also, the sangiovese and refosco at Bianchi were quite nice; and the sangiovese and "up shiraz" at Eberle. Next time I'll try to hit Tobin James, a little further east on Cal-46. Wine tasting on Thursdays??? Not crowded at all, though there can be crowds to go on the cave tours at Eberle, any day of the week.

Thursday evening I stayed in San Luis Obispo. SLO has a great farmers market along Higuera Street. I had dinner at the Big Sky Cafe, and a few after dinner beers at the Central Coast Brewing Company. That was a long, long day!

I started back early Sunday morning, March 4th, on the drive from Vista to home. A very long day, but I was able to visit several wineries on the "west side" of Paso Robles:
I've been to Castoro and Caparone before; the others were my "first time" visit. (That's not hard, since there are about four dozen wineries in the Paso Robles area!)

Interesting finds include the "Black Monukka" dessert wine from Rotta; some very nice Montepulcianos from Fratelli Perata; and the great value Sangiovese, Nebbiolo and Aglianico at Caparone. I'll probably be a return visitor to Fratelli Perata; Doce Robles; and Caparone.

I'm quite fond of the zinfandels and syrahs of Paso Robles; and I'm very excited about the italian varietals I've seen over the years (sangiovese, nebbiolo, refosco,  aglianico, etc. ) No more wine tasting for a few months! 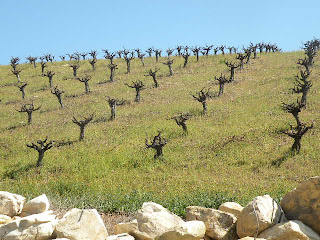 Chuck
I am a retired, professional urban planner with a BA in Geography from California State University Northridge and a Masters in City & Regional Planning from Rutgers University (New Brunswick, New Jersey). I've lived in downtown Hayward since June 2005. I retired in December 2009